The first quest of Act 2 requires you to go down into The Sewers which is a dungeon below Lut Gholein. You can access this dungeon one of two ways, the entrance by the ocean which you go down the stairs to access or the trap door next to Greiz, the guy who lets you Hire/Revive Mercenaries during Act 2.

For this quest you'll need to venture down to Level 3 of The Sewers and defeat Radament. He'll drop your actual reward for this quest, a Book of Skill, which will grant your character a Skill Point when you use it. In the Golden Chest next to Radament you'll also be able to find the Horadric Scroll quest item which will start Act 2 Quest 2: The Horadric Staff.

Looting the Horadric Scroll is not required to begin the next quest and arguably is just a waste of your time since it serves no purpose aside from a few extra lines of dialogue from Deckard Cain. 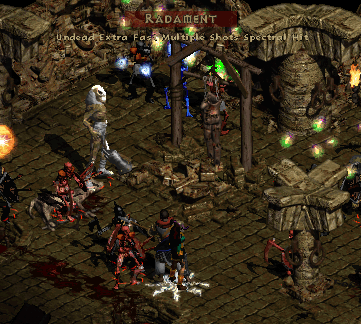 This quest is one of the few quests in Diablo 2 that offer your character a permanent upgrade as a reward. In this case your permanent upgrade will come in the form of a Skill Point from the Book of Skill that Radament drops when defeated. If you'd like to learn more about all of the quests in Diablo 2 that offer you a permanent reward upon completion head over to my Quests that give Permanent Rewards Guide!

If you're someone who forgot to loot the Book of Skill or had a rollback happen to you and you lost the Skill Point or the Book of Skill, fret not. All you need to do is defeat Radament again and he'll drop a second book for you. In my experience no matter how your quest bugs out on you or how you lose the Skill Point it's always possible to defeat Radament again and obtain another book.