This quest begins automatically when you first enter the Catacombs Level 2 or any lower floor. All you have to do for this quest is to defeat the final boss of Act 1, Andariel. You'll find Andariel on Catacombs Level 4 and before engaging her you should try to clear out as much of her room as possible. She won't engage you until you step foot on the carpet in her room that leads up to her. If you're a class with some AoE abilities, use them at the top of your screen as far up as you can see to take out anything that is up there before Andariel charges down.

The other pieces of advice I can offer you is to equip some Poison Resist rings if you're struggling with Andariel as most of her damage is Poison. Andariel is also very resistant to Poison attacks and weak to Fire on every difficulty. Last but not least, if you're a class that is capable of kiting then pull Andariel out of her room and into the previous one with the pool of blood. You can get her stuck on the pool and kite her around it quite easily making the fight much easier. 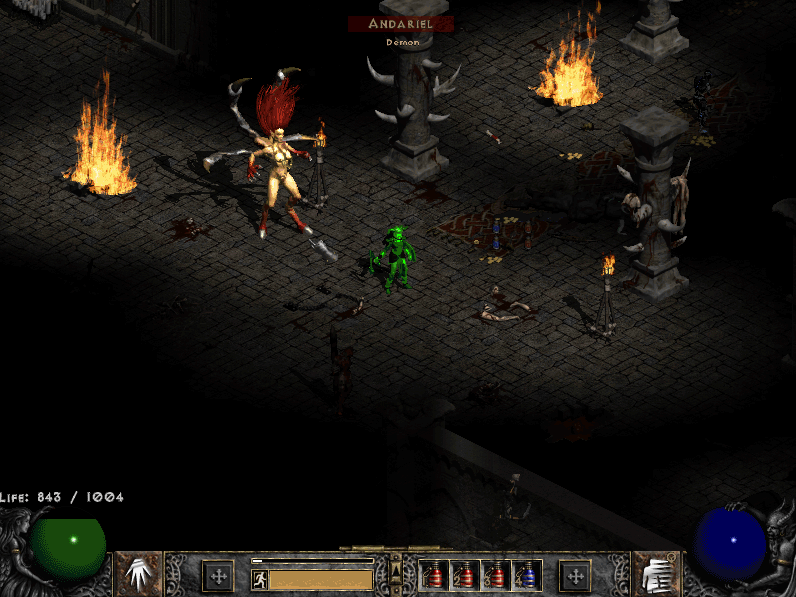 Andariel is one of the more commonly farmed bosses in Diablo 2 but usually not on Hell difficulty. Many players farm Andariel on Nightmare due to her higher than average drop rate for an SoJ aka Stone of Jordan. This item is one of the only rings in the game with + Skills on it which makes it a very desired item by almost every build. For more information about farming Andariel follow the link.

There is also a method worth noting called quest bugging Andariel that will allow you to get consistently better drops from her. When you kill a boss for the first time on a new difficulty you will get all 'good' drops, basically your first kill ensures that no junk loot drops. No white items, no arrows or bolts or potions will drop your first time taking down a boss. Each time after this, junk items like these can drop instead of good ones.

Quest bugging Andariel will give you the best odds of farming up an item like the Stone of Jordan. Follow the steps below to quest bug Andariel:

Step by step how to Quest bug Andariel:

1. Start a game with the character you want to bug the quest on (Can't have finished the Andariel quest yet)
2. Defeat Andariel or be next to her when she dies if someone does it for you
3. Wait for the automatic Town Portal to open up after she dies
4. Go through the Town Portal - from this step on any improper action can mess the whole thing up
5. Talk to Warriv and select Go East
6. Immediately Save and Exit after arriving in Act 2