With both new quests in hand head west to Ellun River Mouth. Over here you will want to talk to Estino and refresh your quest. Also, you will want to head to the blue "X" on my map. Overhere you will find the Wedding Ring. Once you've completed the quest bring the ring back to etheir Alteno or Enia.

NOTE: Video of the location of this Wedding Ring.

It doesn't matter which NPC you bring it to. After you've done that you will want to fly back to Pilgrim's Respite and grind until you reach level 16 if you didn't get from the quest you just did.

NOTE: As of right now grinding is actually faster then questing, 3k per kill and 20k per quest. If you can tolerate grinding I highly recommend you do for as long as possible since you will need to sooner or later.

Once you do hit level 16 two quests will appear in Pilgrim's Respite for you. With your two new quests in hand leave town and head northeast to Altamia Ridge. Here you will need to kill the Rock Kalgolem elementals for 8 Kalgolem's Essence. You will also need to harvest Ruko and Rubus for your other quest.

NOTE: Rubus is a VERY rare berry up in this area. Chances are you won't see many spawns up in this area. However, I created a video to show you each of the spawn locations up here for the rare herb Rubus. Video location of all Rubus for this quest.

Once you're done both quests continue along the path heading north towards the blue arrow on my map that is right above the Contaminated Swamp. 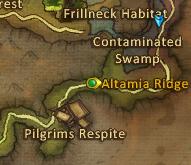 On your way there you will run into an NPC nammed Eninte. Accept her quest and continue to the Blue arrow (If it is night time Eninte will be a Demon, you'll have to come back at day and accept it). At the blue arrow you will find two NPC's that have a TON of quests available to you. Accept all of their quests and put them on track. You will need to do the following quests while you're in the swamp: 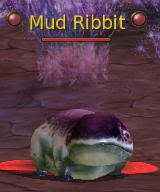 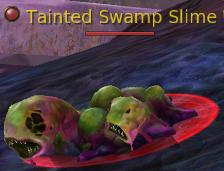 NOTE: You also have a campaign quest for this area to kill Poisonous Bubblegut. He can be found patrolling around the swamp but can NOT be solo'd. Well, let me retract that statement. He can be solo'd but you'd have to get hella lucky and not every class can do it. I recommend looking for a group while you're here or spending a few minutes while grinding to put together a group. When you kill him the quest you can turn in is worth 100k XP.

NOTE: If it is night time you will not be able to find the Contaminated Plumas since only ghosts will be out. Just grind the ghosts until day time.

Additional Note: I highly recommend grinding in this area until level 17 and at least long enough to kill Bubblegut. It will make things MUCH easier in the levels to come.

Once you complete both quests head back to the NPC by Bubblegut. Turn in all of your quests and then head back to Pilgrim's Respite. Back at Pilgrim's Respite you will want to turn in your two quests. Accept the other quests that are available to you here as well. Now, if it is night time in game you will want to do the quest "Dispelling Ancient Spirits" The Ancient Spirits can be found just east of town along the ridge.

Also, if you where able to kill Bubblegut fly to Verteron Citadel right now and turn in your quest. (Unless it is night time of course, then kill the ghosts). Right now you should be level 17 and about a quarter way through. If you are not you should highly consider grinding where the ghosts spawn waiting for night, or grinding something to get at least a quarter way through 17.

Don't worry about leveling slow while grinding. Grinding is just as fast as questing, if not faster. Only reason this is a guide for quests is because questing isn't quite as boring. So, since this part can be a bit misleading I'll give you two options

Option 1: You can stick around and wait for night, grinding around where the ghosts spawn and do the "Dispelling Ancient Spirits" quest. This will get you to about 17 1/4 depending how far you're currently through your level.

Option 2: Head west to Lunax (Next questing area) and continue on with leveling. Still make sure you're level 17 so you can pick up the quests in this area.

The next section of the leveling guide will cover the Lunax questing area and the continuation from there. I will NOT be coming back to do the Ghost quest, this quest is optional and you should do it now if you want to do it.