From Pilgrim's Respite you will want to head west over to Miraju's Holy Ground. Here you will find Lunax who you will want to talk to and refresh your quest at. In order to get up to Lunax, you will need to fly. I recommend setting your bind location here at the Obelisk, making it easier for you to get up here.

A lot of the quests in this area will not be aquireable until level 18, but grab any of the quests that you can. Pretty much every quest that you have no requires you to head to the Tursin Outpost and kill elites. I HIGHLY recommend getting a group and plowing through all of these quests. You'll level extremely fast. If for some reason you can't get a group then you're sentenced to grind the same quest over and over again until level 18.

Doing this quest over and over is rather good XP, but boring since you have to grind it. What you need to do for this quest is kill 14 Tempest Spirits and 8 Frost Wind Spirits. I've also made a video of this quest, of usually where I fly over to when doing this quest. You will have to repeat this quest 4 - 5 times before level 18.

Another good thing about this quest is you get Iron Coins, which you can turn into the quest NPC for items and gear.

When you reach level 18, return to the NPC's up top and grab the new quests that are available to you. First quest you will want to do is fly down to the water surrounding the tree you are in and kill 6 Aqueous Spirits.

While killing the Spirits work your way south to Elote who is a treant with two quests. He will give you the quests "Spirit of Nature" and the quest "The Wriggot Menace". 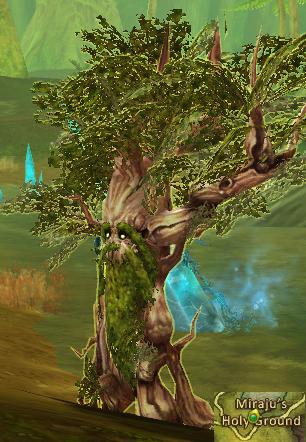 Finish the quest to kill the water Spirits then fly northwest to Mileno whom is another trent. This treant will give you the Spirit of Water. Location of Mileno:

The Wriggots can be found all around the forest most commonly around trees. Once you collect 5 Vrilli return to Elote and turn in your quest. Elote then offers a quest where you can repeat the one you just did up to 100 times, but lets face it. That quest sucked. Fly back up to Lunax and turn in your quest. Now it is time to head back to Verteron Citadel. If you didn't use the scrolls or sell them to port back here that you got from an earlier quest, use one now.

Otherwise return to Pilgrim's Respite and fly there. I know I said that I wouldn't give this option but, If it is night time out and you want to, do the quest to kill 10 ghosts. Once you're back in Verteron turn in your quest to Hyacinte.

Buy anything you'd want from the AH and go to Sanctum for new skills. When you're done you'll want to head to the Verteron Observatory which you can fly to from Verteron Citadel.