When you arrive at the little camp right outside of the Northern Tolbas Forest you'll want to accept the quests from Gano and Ondanius.

They will give you 3 quests, "The Forest Outlaw" , "Collecting Kukuru" and "Abandoned Scarecrow". The first one you will want to do is "The Forest Outlaw". This quest will require you to kill 9 Starving Worgs and 5 Violent Worgs. 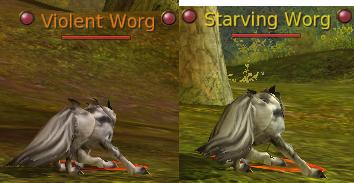 NOTE: There is a bug in beta where the Violent Worg's around the quest givers don't give credit. To fix this you will need to run down the path and kill the Worg's further south.

After you complete this quest return to the two farmers and turn in your quest. Now you'll want to head north to their farm. Here you will want to collect 4 Kukuru, which you will be required to have at least a 20 Vitality Gathering skill. If you don't you can find Aria and other various materials around the area for you to raise your skill.

NOTE: While you're killing everything in this area harvest as much Kukuru as possible to raise your Gathering skill. You will need it raised for quests comming up.

In this same area you will find Nola who is an Abandoned Scarecrow. He has one quest for you to turn into him and also two quests available for you to accept.

Nola wants you to kill 15 Peons in the area and collect 7 Pumpkins for him. Strange requests from a scarecrow, but free XP! The pumpkins can be found all around him and all over the farm. As for the peons, the Lepharist Revolutionest Peon is the ONLY one that counts.

Once you're done both quests return to the scarecrow and turn in your quest for killing the Peons. He will have another quest available to him called "Belbua's Treasure". You can find Belbua's Treasure at the far Northwestern side of the farm. It is a wine barrel hidden behind a shack.