That isn't the only thing that makes this location worth visiting though, the Minotaurs also drop a ton of Salvageable materials such as white weapons and armor as well as the common blue and occasional green/yellow. Ontop of that there are a ton of gathering nodes in the local area for you to pick from. In about an hour of farming here I make upwards of 1 - 1g 50s! Between this location, my Straits of Destruction Farming Route and my Frostgorge Sound Farming Route I was able to make a total of 50g within 2 days after hitting level 80. Quite a bit of money in such short time!

(Screenshot on the map below of where this location is exactly)

The best thing about this farming location actually has nothing to do with the actual location. Jormag, one of the world dragons can spawn in this zone and if you're in the zone farming you're going to hear about him the second he spawns! The other awesome thing about farming here is the fact that there are about 5 or 6 different events that can go on all around your area. A few of my favorites are the one by the Grawls which has you collect Norn Artifacts that the Grawls stole. Almost no one is ever around to do this event which makes it much easier for you to do it alone. You'll only need to collect 9 or 10 artifacts in order to complete it solo.

Then you have another event on the opposite side of the farming location where has you take back Coiled Watch from the Svanir and defend it immediately after you take it back. Two easy events for 11k xp each and 300 Karma as well as some silver. Then after you own Coiled Watch there is a Dolyak escort that takes place out of the town. In addition to the Dolyak escort that starts nearby the Arundon Waypoint to the south. And then if all that wasn't enough the finale event of them all is *drum roll*...

The huge dragon that swings by the zone every 3 hours and attacks! The Claw of Jormag spawns every few hours and attacks Frostgorge Sound. If you're in this zone you'll definitely hear about it in map chat which will give you plenty of time to port or race up north to join in on the massive world event! 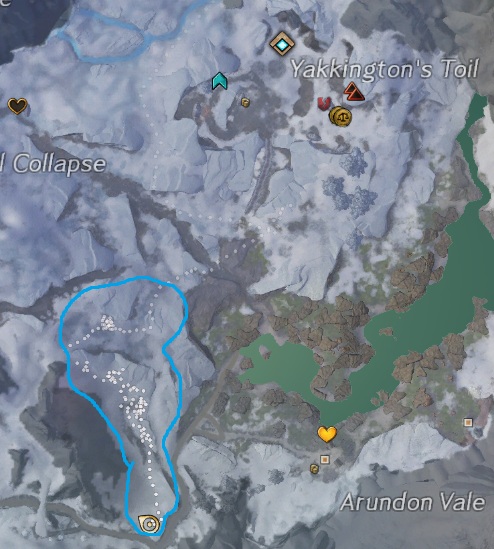