After you kill 7 of the Rakeclaw Fillnecks head a little bit closer to the Geolus Campsite and kill Togs and Plumas.

After you've completed both quests head more south, a little bit past the Geolus Campsite. Here you will find more Rakeclaw Frillnecks and more importantly their eggs which can be found around trees in the area.

NOTE: While you're in the wide open plain, don't forget to raise your gathering skills as well.

You should have the following quests:

Now, it is time to return to the Dukakai Mine. Yeah, I know. This place blows. I completly agree. You will need to do the following quests at the Mine this time around:

Kill the Kobolds here for each of the 3 pieces of her stolen jewelry.

Each of these 3 mobs is located in the Dukakai Settlement, not the mine.

You will need to get the Stolen Village Seal from the Pile of Items far back in the Mine. Above is a picture of the location. When you try to loot the pile the Shugo in the cage nearby will tell you that the Village Seal is not there.

Interact with him and he will have a quest for you. You will need to agro Mimiti who is just below the hill and pull her up to him. You will need to hit her and have her hit you a few times while you're running up the hill. Once you get them close enough to each other a cutscene will happen. After the cutscene you can turn in your quest and then you'll be able to loot the seal from the pile. 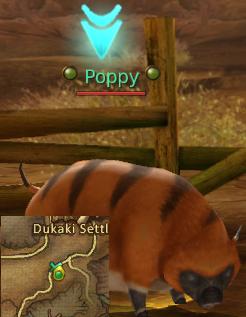 Find Poppy. This is the final quest you will want to do in this area since it is an escort. Once you find him you will need to interact with him to begin the Escort. It is important that you don't move too fast otherwise you will lose him. You also will need to protect him so that he doesn't get killed.

After you've completed both quests, start the escort with Poppy and bring him back to town. Turn in all 3 of your quests. After you turn in your quests a new one will pop up from Abolos called "Lightningfoot Tuka". This quest requires you to return to the Dukaki Mine yet again and kill the Lightningfoot Tuka.

The purple X on the picture above is the location of the Lightningfoot Tuka on the map. Head over to his spawn location and wait for him to spawn. When he does he will keep running for the village and will not stop when you attack him. You'll need to chase him down and continually punch his face in. When you kill him return to Abolos and turn in your quest. From Abolos head back to Southern Tolbas Forest.