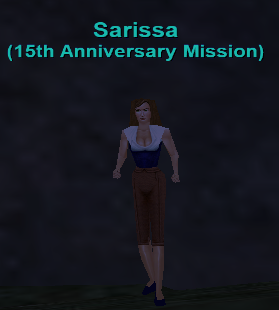 A Ranger's Tale is pretty straight forward of a quest and it's one of the few Anniversary quests that gives you a useful clicky. Bottled Essence of Vex is your reward for completing this quest, it's a 20k targeted AE nuke that hits up to four targets with a 5minute cooldown.

You begin this task in the northwestern portion of East Karana and you have to do some basic hails/traveling before any fighting. Speak with Sir Morgan to the east then run south to the village and wait for his arrival near the fences.

Below I have made a summary of each step of this task for anyone who is a little bit familiar with it and doesn't need a step by step walkthrough of every part. Use my map that's below for any additional guidance that you may need.

1. Hail Sir Morgan
2. Run South to Village
3. Hail Fen Sightwell
4. Defeat Tallus Holton at the Bandit Camp to the north & pick up the item he drops on the ground upon being defeated
5. Go to the central part of the zone and start defeating Lions, Spiders and Aviaks for the next part of the quest
- Hold onto Fine Lion Pelts
- Hold onto Exquisite Spider Silk
- Hold onto Lordly Aviak Plumage
6. Turn in 6 Fine Lion Pelts to Shiraleen the Shrewd down south
7. Hail Fen Sightwell
8. Go to the Druid Ring and defeat Druids for 6 Sturdy Treant Branches
- If the Aviaks don't drop all the Lordly Aviak Plumage you need, go to the village in the northeast and defeat 6 "a corrupt guard" then speak with Balthazar and get the Lordly Aviak Plumage from the chest in town
8. Give Fen Sightwell the 6 Exquisite Spider Silk, 6 Lordly Aviak Plumage and 6 Sturdy Treant Branches
9. Hail Bryan
10. Leave the Village (Have the whole group leave town then have one person run around town near Bryan's house for the update)
11. Travel east to the road that leads to the entrance of Highpass Hold
12. Defeat the Dragon Broodlings
13. Travel further up the road
14. Defeat more Dragon Broodlings
15. Travel further up the road to the first Guard Tower
16. Defeat more Dragon Broodlings
17. Travel further up the road to where the next Guard Tower is
18. Defeat the Dragon Broodlings & bring Vex the dragon down to 10%

After you speak with Fen Sightwell in the village you'll have two steps to do:

4. Defeat Tallus Holton at the Bandit Camp to the north
5. Get the other half of the bow from Shiraleen the Shrewd

There are multiple ways for you to complete both of these steps; I am covering the methods that are easiest for people who are boxing. Regardless of if you're boxing or not - defeating Tallus Holton and picking the bow half up off the ground is the fastest way to complete this part. (Note: After defeating Tallus you can fight treants at the Druid Ring for 6 Sturdy Treant Branches to save time later).

A picture of what you're looking for on the ground is shown below. It's a small rod that drops in the exact location Tallus Holton is defeated.

As for Shiraleen the Shrewd, she has 3 different things you can do for this bow half...

I personally find the Fine Lion Pelt one to be the easiest - while you're farming the Lion Pelts you can also farm Exquisite Spider Silks & Lordly Aviak Plumes for the next part of the quest. Those of you who are soloing/duoing though may find opening barrels to be easiest.

Either way once you're done and have both Bow parts head north to the druid ring where we're going to collect 6 Sturdy Treant Branches. Unless you did this earlier we need to do it now. Every item except the Lordly Aviak Plumage is a piece of cake to get... If you can't get enough Lordly Aviak Plumage from defeating the Aviaks you're going to need to head to the northeastern outpost where you'll find Balthazar and "a corrupt guard".

What you need to do at this village is defeat all of the a corrupt guards then hail Balthazar. Be warned - Balthazar will attack on sight anyone who is an evil race or anyone with bad Qeynos reputation. Balthazar will give you a key which allows you to open the family treasure chest inside his building. Inside the chest is 6 Lordly Aviak Plumage.

Return to the village and hand all 18 items to Fen Sightwell. He'll tell you to speak with Bryan; do that and the next task objective is to leave the village. Despite this sounding obviously easy - it's actually not. In order to get this part of the task to reliably update your entire group needs to leave the village then you'll want to have one person run into Bryan's house and then back out of it. What I do is have the group wait at the Highpass path entrance in the east while I do this part of the task.

Vex is rooted in place and he deagros at 10% for a short scene. After the scene is done you'll have to finish defeating Vex and then hail Fen to complete the adventure. Vex drops the bonus loot for this HA, as far as I know he has a 100% chance of dropping the Bottled Essence of Vex.