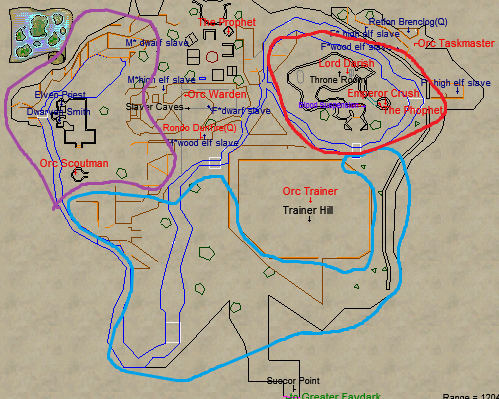 One of the best leveling locations for players in their teens is Clan Crushbone which is a dungeon off of northern Greater Faydark. This dungeon is filled with many different orcs between the levels of 4 - 22 (or so). When you first come to this zone you're going to want to hang out in the area that's light blue on my map above.

This area is just south of Trainer hill and generally consists of the lowest level enemies in the entire zone. Once you start leveling up a bit you can push either northeast towards the castle (marked in red) or push northwest towards the area marked in purple.

Overall the Purple area is easier with a level spread of 8 - 12 about. There's a few buildings full of orcs here, one has an Orc Scoutman in it as well as a 'mine' area a tad top the east with an Orc Warden in it. After you reach level 12 you can either bail and go to a different zone or move over to the eastern portion of Crushbone into the castle.

The castle, marked in red on my map above, is the hardest camp of the entire zone. Inside the throne room you can find orcs which are in their mid and even late teens. In addition to these orcs there's also Emperor Crush and Ambassador Dvinn inside the tower which is adjacent to the throne room.

Some of the loot from this zone includes Bracers of Battle, Dwarven Ringmail Tunic and Dwarven Two-Handed Axe.

- The only way to reach Crushbone is through Greater Faydark. The zone line to Crushbone is found in the northern portion of Gfay.