This page contains a list of merchants that sell an assortment of Pottery Supplies. There is an NPC on this list for every single race's home town as well as some of the more commonly visited zones, like Plane of Knowledge.

The majority of Pottery Items are sold by all of these merchants however if you can't find the item you need sold by the merchant in your home town I recommend you check the NPCs in Plane of Knowledge or in East Freeport. All three of these NPCs have almost every item that's sold by vendors for Pottery combines.

This list not only demonstrates the easiest of these NPCs to find but also the NPCs that sell the most stuff.

The best NPC for you to shop at for Pottery Supplies is Elisha Dirtyshoes in the Plane of Knowledge. She's a part of PoK the moment the zone launches during the Planes of Power expansion pack. The alternative is another NPC, Sculptor Radee.

Sculptor Radee isn't added into PoK until the CoTF expansion pack. It's much much later in the game so if you're playing on a TLP this NPC likely won't be around for you. Once Sculptor Radee is added to the game though, he's the best guy to shop at.

This is one of the best vendors you'll want to hit up for Pottery Supplies prior to the Planes of Power expansion pack.

There are multiple merchants inside the building that is circled on the map above. This is one of those pain in the butt places where the Pottery Supplies are split between three or four different NPCs. Check both the first and second floor and all the merchants to find the item you need.... Or just shop in a different zone! 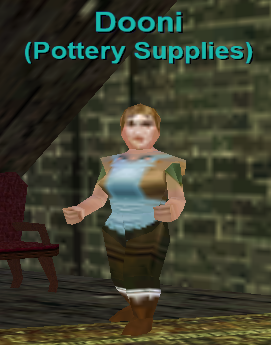 This NPC doesn't have every item that's used in Pottery, she only carries many of the Patterns used. In order to get other materials, like Block of Clay you'll need to visit the [Smithing Supplies] merchant Glazn D`Unnar who is in Neriak Commons instead.

Much like many of the other starting towns -- not all the items we commonly need in Pottery are sold by just 1 merchant. Marta Claytoe sells all of the Patterns and Recipes which are required for Pottery while Bodbin sells things like clay and other combineables which are commonly used in Pottery.