Depending on what expansion it is will determine where you'll want to go to find Poison Vials for sale. If it's Planes of Power you'll find Poison Vials being sold in the Plane of Knowledge; if it isn't PoP you'll have to do a bit of traveling to find a vendor that has these.

This page doesn't list every vendor that sells Poison Vials; I only list the most convient vendors that sell this item. I do take into consideration TLP servers and the fact that they'll have to use inconvient vendors a lot of the time prior to the release of PoP. That's why you'll find multiple entries instead of just PoK!

Those of you who are playing on a server that hasn't yet unlocked Planes of Power will find the best location to buy Poison Vials in East Freeport. If you're an evil race I recommend putting some plat in Shard Bank and just creating a Human as it'll save you some time.

In addition to the two vendors shown in screen shots above, you can also find Poison Vials sold by Toxdil, an NPC a bit further north on the map and deeper into the Freeport Arena Tunnels.

In the central portion of PoK you'll find Toxicologist Huey which I think is unavailable until a later expansion (CoTF?). On the western end of Plane of Knowledge you'll find the Tradeskill buildings, in one of the southern most buildings you'll find the Poison Supplies Merchants. These guys are available the moment PoP unlocks on your server and sell Poison Vials.

Gindlin Toxfodder is found in the eastern portion of West Karana a hop skip and a jump away from where Wizards port into the zone at. He's a human and probably shares the same faction as the other good-aligned humans so evil races won't be able to purchase from him. 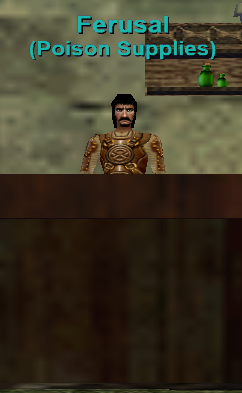 During the Shadows of Luclin expansion you can find another NPC that'll sell you Poison Vials in Shadow Haven.