Where to purchase Soda 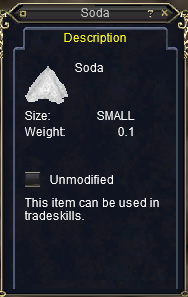 Soda is an ingredient added into the game during the Luclin expansion pack which can be purchased in Shadow Haven and used to create Soda Water, an item used in a few important Brewing Combines. It's also used to make Ethereal Curing Agent and Ethereal Temper during the Planes of Power expansion pack.

Until the VoA expansion pack the easiest place for you to go and purchase Soda is from River Mudhands in Shadow Haven. It's a hop skip and a jump away from PoK and the zone is a whole lot confusing than Crescent Reach, certainly less laggy since it uses older graphics.

When VoA is released on your server, Caden Zharik in PoK will start to sell this item. At that point in time, this'll be the easiest place for you to go and purchase Soda. The other NPC mentioned for Plane of Knowledge, Chef Denrun, only becomes available once Call of the Forsaken goes live.

This NPC apparently becomes available during the Veil of Alaris expansion pack.

This NPC becomes available during the Call of the Forsaken expansion pack, two expansions later than Veil of Alaris.