How to obtain Jumjum Stalks

Jumjum Stalks are used in different Baking & Brewing recipes, such as Jumjum Spiced Beer, Jumjum Cake and so on. The items made with Jumjum ingredients are also commonly used as subcombines in other recipes like Misty Thicket Picnics.

You'll find Jumjum Stalks in Plane of Knowledge sold by the main three Baking NPCs (Culkin Ironstove, Klen Ironstove & Chef Denrun) as well as in Rivervale. If Planes of Power is not yet out on your server the only place for you to obtain these Jumjum Stalks will be in Rivervale.

There's 3 different types of Jumjum Stalks in Rivervale, one drops off Nillipus, the other is a ground spawn near the Druid/Ranger Guild and the third is the typical vendor purchased Jumjum Stalk. Each of these will teach you a different version of the recipe when you combine them, it's something to keep in mind for later.

Klen Ironstove, Culkin Ironstove (not shown here) and Melet Ironstove are all available as early as Planes of Power - the same expansion that PoK goes live during. The other NPC shown in my screen shots above, Chef Denrun, is unavailable until the CoTF expansion pack.

These vendors sell basically every that is sold by vendors and used in the Baking profession. Chef Denrun has additional goodies which the others do not but not everyone can use him since he isn't available until so late in the game.

This is the merchant you'll want to visit in Rivervale for Jumjum Stalks. She is found in a small vendor stand just outside of the Druid and Ranger Guild Hall. In the farm fields just east of Daleen Leafsway you'll also find a Jumjum Stalk ground spawn which can be used in recipes as well. More on that is below. 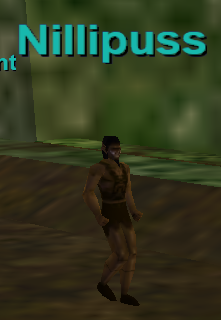 In addition to the Jumjum Stalks that you buy, you can also obtain two different Jumjum Stalks from defeating Nillipuss as well as from a ground spawn in Rivervale. Nillipuss patrols all of Rivervale and drops a Jumjum Stalk with a different item ID than the one sold by merchants and/or the one picked up from the ground.

The Jumjum Stalk on the ground is found just outside of the Druid/Ranger Guild Hall. It's a pretty large bag (shown in my screen shot above) which makes it difficult to miss.