Where to buy Cheese 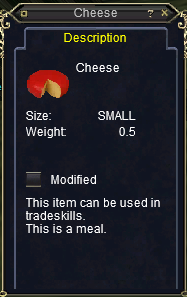 Cheese can only be purchased in a few different places and is used in a couple different Baking recipes. The first zone available that sells Cheese is Jaggedpine Forest; the most convenient zone that sells this item is Plane of Knowledge. You'll find more information about these two vendors below.

You can find Chef Brargus right near the Nedaria's Landing zone line in Jagged Pine Forest. As far as I know this is the very first vendor in the game you can access that sells Cheese.

Klen Ironstove, Culkin Ironstove (not shown here) and Melet Ironstove are all available as early as Planes of Power - the same expansion that PoK goes live during. The other NPC shown in my screen shots above, Chef Denrun, is unavailable until the CoTF expansion pack.

These vendors sell basically every that is sold by vendors and used in the Baking profession. Chef Denrun has additional goodies which the others do not but not everyone can use him since he isn't available until so late in the game.