Troopers are the "big baddies" of the Republic; decked out in heavy armor and carrying giant and extremely destructive weapons. Troopers are great whether it be on the front lines or in the back providing ranged support for their allies. Much like the Jedi Consular, Troopers are able to specialize in either healing or the ability to tank depending on what the player prefers. But be warned, once you choose one spec (Commando or Vanguard) you can't go back. Players looking for a class that almost literally wears tank armor and carries giant weapons that blow stuff up will enjoy the Trooper.

The Empire mirror class of the Trooper is the Bounty Hunter.

Not all heroes carry Lightsabers. Some just have the will to fight.

For decades, the armed forces of the Galactic Republic defended their civilization against the seemingly unstoppable Sith Empire. Despite countless setbacks, the men and women of the Republic military never backed down until the Senate ordered them to do so. These brave souls remain ready and willing to lay their lives on the line today.

In the wake of the Treaty of Coruscant, the Republic military has begun recruiting from within its own ranks, creating cutting-edge Special Forces squads for the inevitable day when the war with the Sith Empire begins anew. These advanced strike teams are comprised of only the most talented and disciplined soldiers—a new breed of elite Republic Troopers.

These Troopers are the embodiment of the Republic military’s highest aspirations—the most advanced fighting force in the galaxy. They are equipped to face any foe in any environment, but it’s not their gear that makes them tough—it’s their guts. The Troopers’ greatest weapons are their indomitable spirit, their unwavering sense of duty and their undying loyalty to each other and to the ideals that the Republic represents. In this age, the stakes have never been higher. The Republic must win or face extinction. The fate of the galaxy rests upon ordinary men becoming extraordinary heroes. This is the path of the Republic Trooper.

Trooper's Relations with the Jedi

The Knights of the Jedi Order have defended the Republic for generations, but they have not fought alone. A host of unsung heroes have marched at the Jedi’s side—common men courageous enough to enlist and face the same risks as their Jedi comrades despite not having access to the Jedi powers of protection. These heroes have not gone unappreciated by the Jedi. The men and women of the Republic military are accorded complete respect and admiration by the Order and by the Republic’s political leaders.

In the years since the Treaty of Coruscant, the Jedi have withdrawn in significant numbers to their homeworld of Tython. Their presence in the Republic military, though still significant, is not what it was during the war. In many ways, the Republic’s newly-trained elite Troopers have stepped up to take charge of the Republic’s defenses. When Troopers are partnered with the Jedi, they are a force to be reckoned with on any battlefield.

Troopers in the Field

Deployed to the hairiest battlefields in the galaxy, Republic Troopers generally travel in small, specialized squads. It is not uncommon, however, to see a Trooper engaging enemies on his or her own. Whether operating solo or in groups, members of the Republic Special Forces have become intimidating opponents to their enemies.

The Republic’s experiments with a new generation of heavy blaster rifles have proven successful, sparking a galaxy-wide trend towards larger, more powerful and more versatile armaments. It takes a great deal of strength and training, however, to wield these war machines, so they’re rarely used outside the military. Republic engineers have also worked overtime fashioning new defensive gear for the Republic’s most elite soldiers, armor suits that provide maximum protection and flexibility in multiple environments.

Whether fighting as part of a small strike squad or at the forefront of a larger force, the Trooper can unleash unrivaled firepower against his enemies. A Trooper’s rifle is his best friend, and the military is constantly challenged to design faster, more powerful and more reliable blaster rifles every year. Wielding such rifles and wearing protective battle armor designed by the Republic’s top engineers, the Trooper will not hesitate to step right into the crossfire. Whether storming a base or a battlefield, the Trooper charges into the fight, blaster-rifle blazing, to clear a path for freedom and justice. 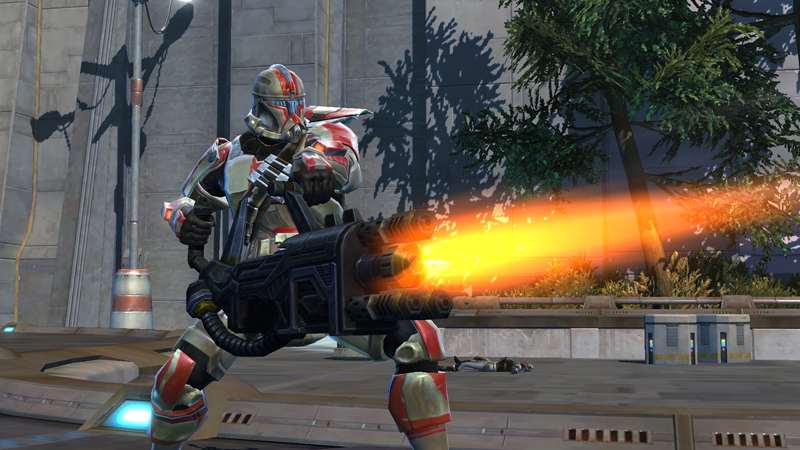