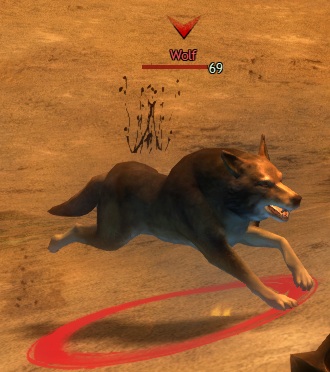 The wolves in Fireheart Rise are an amazing location for you to farm up Large Claws and Fangs as well as higher level items which you can salvage for Globs of Ectoplasm. If you haven't killed too many wolves in GW2 before then you should know that their special effect is that they summon additional wolves while you're fighting them. For that reason I am going to more or less call this area an AoE farming area. You can farm here without AoE, of course, but you will have to be very careful in how many you pull since however many you do pull will double half way through the fight.

In this wolf camp there are two mobs you need to watch out for. There is a Veteran Alpha Wolf to the eastern end of the camp who is a wolf with a bronze frame (has a lot more health and does a lot more damage than the normal wolves). Also further east behind even this would that can probably be solo'd is a Champion Wolf. This is a gold framed mob that will not be able to be solo'd by you and should be avoided at all costs. These two wolves are tucked away in a corner so as long as you avoid them they will avoid you.

To reach this farming location you will want to bring up your map and select Fireheart Rise's Breaktooth Waypoint which is in the north eastern end of the zone. Once you port in at this location head northeast up to the wolf area and get to killing! If you'd like a picture of where the location is in relation to the Waypoint take a look at the screenshot I took below. The farming area is circled in blue.

Aside from the Large Fangs, Claws and salvaging items there is very little else you will find here worth some gold. Sometimes the wolves drop meat too but it is rarely ever worth anything on the Auction House. I always end up just right clicking it and depositing it as a collectible. Also the salvagable hides that they drop, Filthy Hides, salvage into leather scraps, very commonly Thick Leather Scraps which have almost no value at all on the AH (most of the time you lose money with your deposit putting them up).

For this reason I highly recommend you do not salvage these items but instead sell the hides on the Auction House. Trust me on this one, you'll make a ton more money selling the hides than salvaging them! Below is a screenshot of all the loot I got here in 30 minutes while I was under the effects of an Omnomberry Bar. I got a ton more items to vendor, about 50s worth and the following items which I sold on the Auction House for about a gold for them all.