Cauliflower is another one of those pesky materials available to the Chef Tradeskill Profession that can only be found in certain areas. Luckily from what I have seen Cauliflower has quite a few more spawn locations than other food stuffs so if you're seeking a bulk supply of it you'll be able to port around to a few different locations in your search for limitless Cauliflower!

This is at the top left of the area

This is the best location I have found for Cauliflower.

Be sure to follow my white line on the map otherwise you won't make it to where the Cauliflower is. If you're curious how many are here before you head all the way out here take a look at the picture below which is of my Mini map and all of the Cauliflower nodes!

To reach this Cauliflower you will need to head west of the Waypoint past the Risen Hyleks near the Point of Interest and through the caves where you'll pass the Skillpoint NPC. You can grab both of these on your way to the Cauliflower if it is your first time here. After you pass the Skillpoint guy you'll need to run through a few bats before you make it back outside. Then you have a few Skelk you need to skirt around and a river to cross before you reach the Cauliflower.

While it all may sound radically complicated it is actually quite simple. The path you have to follow is very clearly laid out for you so don't worry at all about getting lost. Your biggest issue is an elite (bronze frame) mob that paths around the Cauliflower spawn area. He is easy to kill just is really annoying. The biggest perk about farming in this zone though is the fact that you can catch a Dragon when it spawns. That's right, Sparkfly Glen has it's very own dragon!

It spawns once every three hours but people will go crazy in /map chat when he spawns so keep an eye out! 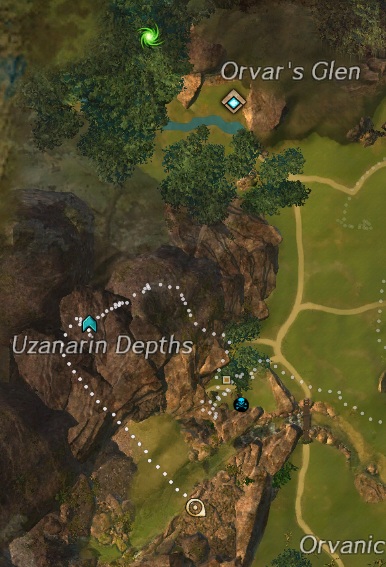