The Basics of WvW

Your first time entering WvW you're going to be overwhelmed and greatly confused by everything. Everyone will be barking orders and you won't know who to follow and it will just be a complete mess. That's what this guide is here to help with. I'll break down all of the basics of WvW to help you better understand it that way once you go in you will have a firm understanding of the basics. The only thing left will be things that you learn through experience!

Now since I know a lot of people like videos over text guides I have this Basics of WvW video guide up on Youtube. With this guide I go over some of the most important basic things you should know about in WvW. While the video goes over a lot of useful information there will be more information in the text guide here. Before I delve into the super basics of WvW let's first go over the two main key points I go over in the video. Then we can go over the basics such as what each icon on the map means and maybe some basic WvW acronyms you will come across.

The two main talking points I mention in the video are...

1. Always listen to your Commander. - As long as the Commander proves themself worthy to listen to you should always listen to them. Don't expect them to always share their strategies with you and things like that, sometimes they just won't have time to do it. Sometimes you are going to have to blindly follow them and trust that they are right and know what they are doing. It should take them awhile to build up this kind of trust with you, don't just trust some random Commander on his very first day. It could end badly.

2. Always watch the chat window. - Unless you're on Ventrilo, Skype, Mumble or the god awful Teamspeak you need to focus on watching the chat window because that is where your orders will be coming from. A Commander's orders are useless if not enough people follow them. Don't be one of those brainless lemmings that just tunnel visions everything they see. You'll still need to be a lemming, just be one that listens to the Commander.

I go over a few more things in the video but I can incorporate them into the next part below.

Understanding the World of WvW

When you enter WvW you will be taken to almost another world entirely. There will be four maps, three of the comprise of the different world's in your bracket (their borderlands) and the fourth is an area known as the Eternal Battlegrounds. Most of the action happens in Eternal Battlegrounds but that doesn't mean the Borderlands surrounding it are useless or unimportant. The first thing you will need to figure out is the color of your world. It changes from time to time (usually each week or every other week).

Now let's get started with the guide! Below I am going to break down each of the many different symbols/areas in WvW to show you what each of them mean that way when you enter it for your first time and take a look at the map your face doesn't end up looking like this. =O

The first thing I would like to show you is a picture of Wildcreek Run (WC) in Eternal Battlegrounds. It is a tower located on the southern end of the map. Take a good look at the icon, remember how it looks because all Towers share that same icon. Also the second thing I want you to look at is when I mouse over the icon notice how it says 'Green Tower'? If you are ever unsure of what something is after reading this guide you can always mouse over it to check. 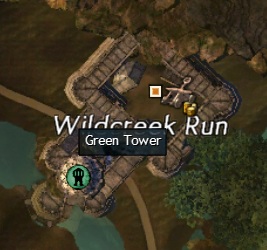 Now next to the Supply Camp Icon above you may have noticed another little icon that looks like a flag of some sort. This is a Dolyak which carries supplies from Supply Camps to Towers, Keeps and Castles. Below is a better look at the icon of the Dolyak. Dolayks are single handedly one of the most important things in WvW because without them, supplies couldn't be carried from place to place.

Enemy Dolyaks also show on the map but only when you're closer to them (sometimes you can see them from anywhere on the map, it seems a bit buggy), your Dolyaks will show anywhere on the map regardless of where you are. Killing enemy Dolyaks is very important not only because it is a good source of WvW XP and Karma but because it will cut off supplies to their Towers, Keeps and their Castle if they own SM. Supply Starving heavily fortified bases is a very commonly used strategy.

There is one more 'small' icon on the map worth mentioning and that is a Sentry.

Sentry's can be found all over WvW and serve really no other purpose than a quick bit of xp, karma and WvW XP. In fact a lot of the time people put entirely way too much emphasis onto the Sentries and go out of their way and into the path of danger just to get the extremely small and often not worth it amount of experience. If the Commander you are with goes for the Sentry, follow him and go for it too but if he doesn't do not go there and break off from the main raid group.

We've gone over most of the smaller things in WvW, Supply Camps, Towers, Sentries, Dolyaks so let's get started with some bigger things. Below is a picture of a Keep. Now keeps are pretty darn big and extremely difficult to breach. You will need to go through two sets of walls to successfully breach a keep but luckily (or unluckily if your keep is the one being attacked) there are often ways to get in that are far out of the normal line of sight.

Most keeps have something called a 'water gate' which is a gate that can be accessed through either a well, sewer system or some other underground entrance. This is the sneakiest way to get inside the keep and often the route many Commanders try and take. If you want to view the picture below in a bigger frame, click on it to enlarge it. 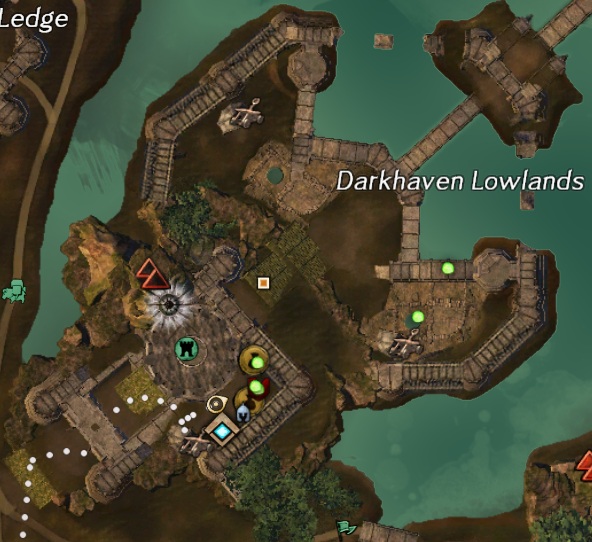 Now that you know about Keeps there is one thing that is bigger than keeps and at the heart of Eternal Battlegrounds, Stonemist Castle. Stonemist is in the dead center of Eternal Battlegrounds making it extremely vulnerable to attacks since it can be attacked from all sides. The team that controls Stonemist though has a tactical advantage over every other team on the map. Especially once Stonemist is fully upgraded and the Waypoint is placed inside.

Along with just showing you Stonemist here I would also like to show you a few more key points inside. Take a look at the orange crossed swords all over Stonemist. These swords appear when there is a large battle going on in the area. Keep an eye out for these if you ever wanna know where the big fight is happening.

Also inside the castle walls you should see three little blue icons on the map. These icons are displayed by Commanders who are a part of your world. 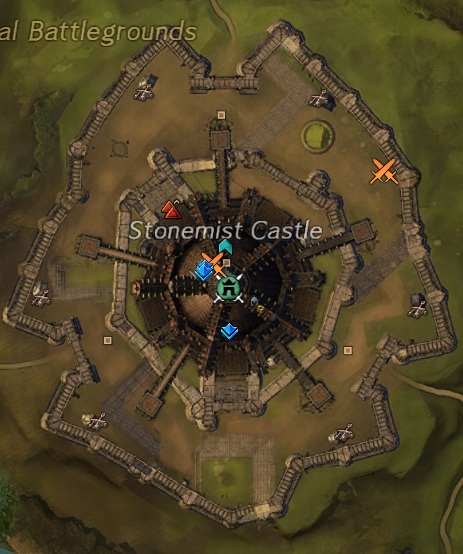 Now there is only one more thing about WvW you will need to know and that is...

These forces consist of different factions in the WvW maps that you can get to help you after you help them. In Eternal Battlegrounds you can find them in three different places, north of the southwestern world, east of the southwestern world and one that is to the southeast of the northern world. In the individual borderlands you can find these factions in the center of the map. They are extremely useful when you control them as they will help protect nearby Supply Camps for you and also attack any enemy supply camps nearby.

Also taking control/helping the other forces will always net you some WvW XP, Karma and experience.

Below is a picture of the Dredge location in Eternal Battlegrounds. Notice how the Dredge Icon is grayed out? That currently means no one is in control of them.

Below is a picture of the Hylek's location in Eternal Battlegrounds. 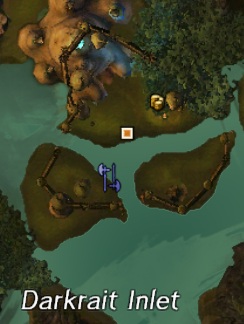