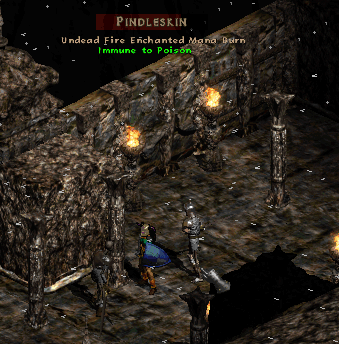 Pindleskin is one of the most well known farming locations in all of Diablo 2 because of how easy it is to reach and complete. If you never obtain the Halls of Pain Waypoint then the portal to Nihlathak's Temple will always be open in Harrogath which takes you right to Pindleskin. For more information on this portal check out my Act 5 Quest 4: Betrayal of Harrogath walkthrough.

The area you find Pindleskin is known as Nihlathak's Temple and has an Area Level of 84 on Hell difficulty. Pindleskin is a Super Unique enemy and because of this has a level independent of the area he is in, his personal level being 85. This means that Pindleskin can drop from the highest Treasure Class in the game (87) but due to some quirks (him having a lower quality level) he is unable to drop TC 87 Super Unique items like Tyrael's Might, Arachnid Mesh and Azurewrath. For more information about how this all works check out my Diablo 2 Magic Find Guide.

You will find Pindleskin at the entrance to the Halls of Anguish which is about one screen away from where you portal in at from Harrogath. When you engage Pindleskin the bodies in the outside snowy area will "activate" and become regular Prowling Dead enemies. Alternatively, if you instead choose to wait awhile the enemies will activate too (10 - 15 seconds of standing around usually activates them). Pindleskin not only shares the same model as the Prowling Dead and Defiled Warrior enemies but also the same mechanics as them.

If at all possible it is recommended that you fight Pindleskin in the area he spawns and do not drag him outside since it is very easy to get overwhelmed by the enemies outside. Prowling Dead enemies have one ability that you should worry about which is a high damage charge that also stuns your character. They have to get within a certain range of you before they charge you at which point they close the gap between you and them very quickly.

Depending on your class and current gear the charge can hit you for over half of your current health and that's the main reason you'll want to avoid dragging Pindleskin out of the building you fight him in. Outside it is extremely easy to get ganged up on by multiple enemies all hitting you at once. The Prowling Dead enemies can not use Charge on you if you're right next to them so you won't have to worry about it if you close the distance between you and Pindleskin quickly.

However if you're a class that can't take many hits from these enemies or you lack the gear to defeat Pindleskin quickly you may have to change your strategy a bit. If you stand in the snowy area around Pindleskin long enough you'll activate the Prowling Dead enemies (pictured above). Defeat all of the enemies out here while keeping a solid distance away from them (if possible) then you can agro Pindleskin and kite him and his Minions outside to easily dispatch them too.

Since Pindleskin and his Minions move extremely slow they're all very easy to kite. A good tip for you is to use obstacles like the craters at the northern and southern end of this area to prevent the enemies from being able to charge you. If you position yourself on the opposite end you can shoot over top the crater to hit the enemies as they approach and when they're in charge range they'll run into the invisible wall surrounding the crater instead of you.