There is one final way you can level as an Elyos from 25 - 27 and that is by questing. Granted there aren't enough non-repeatable quests to level you fully from 25 - 27 but it will take away from the grind. You can get quests east of Teminon Landing at the blue circle on my map. 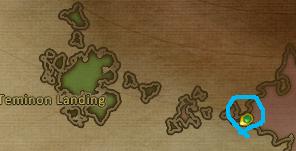 Below are the three quests you can get here to start. There is no specific order you should do them in.

After you complete the quests you will want to return to the NPC's and turn in all 3 quests. You will now be able to accept a Repeatable Quest called "Immortal Soul". This quest is a repeatable quest to kill the Immortal Ghost NPC's just east of you. Below is a video of where to go and me doing this quest.

You can grind this quest out until level 27, if you get bored you can switch it up with any of the other 25 - 27 areas.